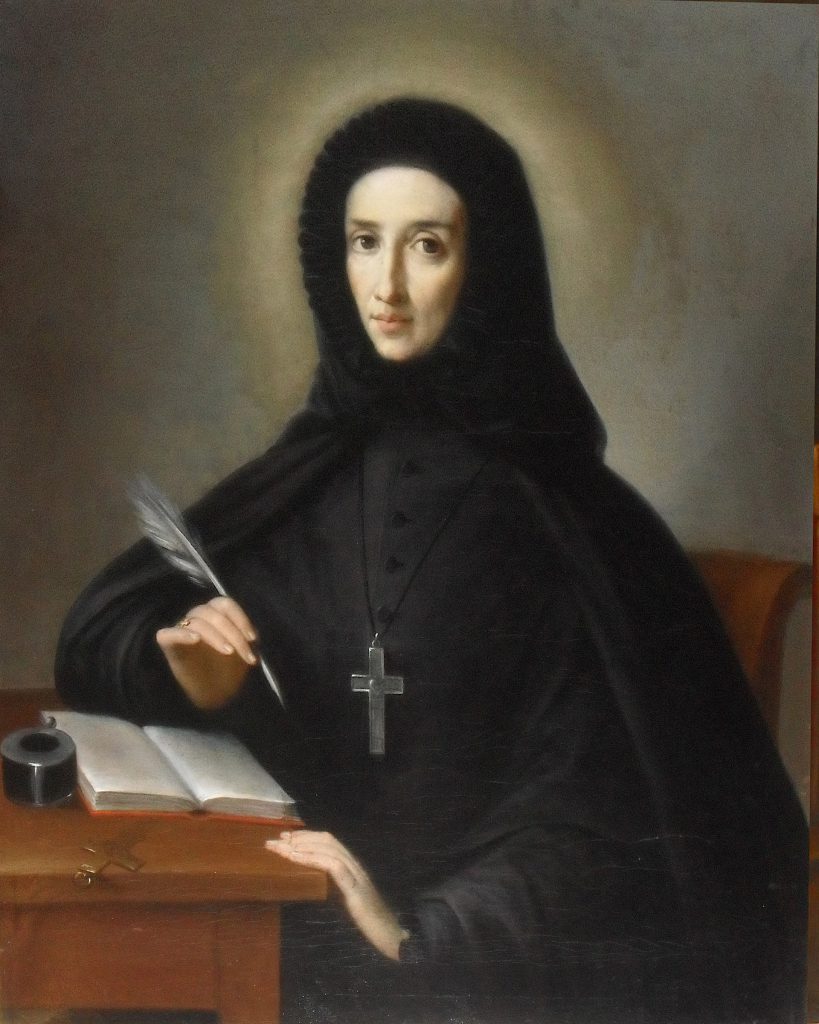 Teresa was born in Bergamo to the spouses Grumelli and Verzeri, in 1801 and is the first of seven children of the family that lives the Christian life radically.From the childhood she was expressing some of the good qualities, which will be determine for her future life. She was active and cheerful, simple and energetic, but much more reflective because of the grace of being guided by a holy priest, Mons. Joseph Benaglio, who was not only her spiritual guide but also, will be the founder of the Congregation of the Daughters of the Sacred Heart of Jesus with her.

When she was young, she felt that God is calling her to the religious life and she responded for this by entering in a Benedictine cloistered convent of St.Grata in Bergamo. However, the uncertainty was accompanying her because she did not understand that how to follow Jesus, and how to respond Him, is it through cloistered life or apostolic life.

In 8th February 1831, Teresa reaches to Gromo in Upper city of Bergamo, near to the Cathedral and the official way to the work, which will take the name of the Congregation “Daughters of the Sacred Heart of Jesus”. With a short time, increased the number of young people in the house of Gromo. Despite the criticisms and the calumnies, the service expands to Bergamo and Brescia and up to subsequent years in Lugan, St.Angelo Lodigiano, Darfo, Breno, Trent and Roverto, Rome and Arpino in Lazio and Recanti nelle Marche… The charity transformed in the educative activities and the welfare service to the most needed in everywhere in a surprising way until her death in 1852.

Three main aspects of the personality of Teresa:

The image of this strong and determined woman has two eloquent features:

– Intense face with bright and piercing eyes, which looks far away,

– The hands hold up a book, indicates that a woman one who used to read and write and has a spiritual and theological thinking with high doctrinal profile, leads from the pedagogical wisdom and from the refined culture.

Teresa is open to the challenges in her time with fineness of thinking and with noble family gestures: she faces the difficulties of her guiding task with determination and the conviction that “nothing is difficult with God” (1835); she says, “The love of God does to overcome every obstacle and win the fears”.

She got a bold attitude to do the will of God from the experience of Benedictine cloistered, and she feels that is challenging her to answer in her time and decide with Mons.Benaglio to give life to an institution, which expresses the consecration in the dedication to the people those who are in needy materially and spiritually.

She was courageous to defend for her Congregation in numerous difficulties and issues, which has to face not only from the government, but also from the church, and tried to go ahead with freedom even when the ecclesial authority was against; she opened and closed the communities as the Will of God.

Pope Gregory 16th generously recognized in her lifetime that, she is a capable and responsible, intelligent and independent woman.

Fr. Divo Barsotti, a spiritual guide, is defined Teresa. He is recalling that how she draws on the Spanish spirituality of the 16th  century (Teresa of Avila, Ignatius Loyola, John of the Cross) and the French spirituality of the 17th  century (Francis de Sales, Giovanna Francesca Chantal, Vincent de Paul). He highlights,  Teresa builds a life in which the love for God and love for brothers are so deeply intertwined and that transforms her to be a sister and mother to all: “Mother ” because she makes the problems of others as her own,“ Mother ”because she knows to listen the voices of her time and also those who approach her.

Teresa guides and leads everybody and everything into the Heart of Jesus with ardent love as a teacher of the spirit of the institute. Why really to the Heart?

The word ‘heart’ biblically means that the deepness and intimacy of the person where the sentiments create the self. In the Heart of Jesus, the love generates and expresses to the Father, to himself and to the brothers and sisters. To this inexhaustible source, the Daughters of the Sacred Heart of Jesus, invited to gain “the exemplary charity” of which to give a gift to the world that lives in many respects without love. She suggests to a sister:  – Most pure charity that “has no sight except the glory of God”  – Universal charity that “does not except a person, but embraces everyone”   – Generous charity that is nothing “is dismayed in the face of adversity”.

Teresa received the inner test from God that is very difficult personally, said Pope John Paul 2nd in the day of her canonization, he says: “God revealed Himself to her as a mysterious presence that was pushing her to bow with profound humility. Abandoning herself to the action of the Spirit, Teresa lived the particular mystical experience “of the absence of God”. Only an unshakable faith prevented her from losing the confidence in this provident and merciful Father, who put her to the test”. The spiritual writings, which she left to the Congregation, overflow the mysterious richness of her soul and her experience as the light to practice the grace where God wants.

Teresa considered the apostolic mission in particularly the formative educational aspect is  “very high and divine ministry” so that her pedagogical teaching derives from theChristian vision of life, daily practice of faith, hope and charity that organized in the preventive  method which described in the ‘Book of Duties’(1844). She inspires to give special attention for the personal growth of the person towards the wonderful, plan of the Creator, by helping them to understand that their “gifts and graces” which anticipate an integral and modern vision of education.

The contact with the needy, her pilgrimage of charity reaches in various places in Italy.  Teresa and her companions prompted to take the initiatives and strategies to respond to the new tragic situation of the war and its consequences and miseries in 19th century by taking care of the minors (orphans), and the adult (wounded and dying soldiers) in their material, moral and affective sufferings.

Three illuminating characteristics for an educator:

*Convince the young that nothing is worse than selfishness*

*Let them escape from laziness and love effort*

*Give a support for interior growth*

She underlined that love, industriousness and the inner values must be the pillars of the life, which is capable to create serenity in self and to others.

The attention of Teresa is raising particularly the figure of the educator, which desires the first witness of the teacher with human and Christian values: education is not with the words, but with the example of the life; educate with love, therefore the style of the person counts.In educating <<one must not start from the feet but from the head>>, realizing with great novelty of her time which education and culture are not an accessory ornament, but necessary “tools” of liberation, and progress for the woman who prepared from the childhood to give her best in life. “Cultivate the mind and heart” of your young women, that is, take care of her integral education, inner growth and education of sentiments and will so that the young woman can fully reach her identity. She says that “Form the person free, wide and loose”.  Teresa Verzeri, in her experience of human promotion and evangelization, was a multi-faceted woman: strong and tender, dynamic and contemplative, rooted in tradition and open to modernity, capable of combining the different richness of feminine existence, and above all speaking even today to young people, educators, consecrated persons, to the family, and  to all.

The patrimony that she left to the Congregation is now shared in Europe, America, Asia and Africa by the Religious and lay people who at various levels make possible that model of evangelical dedication and credible witness to those who have placed charity as the primacy of own life.