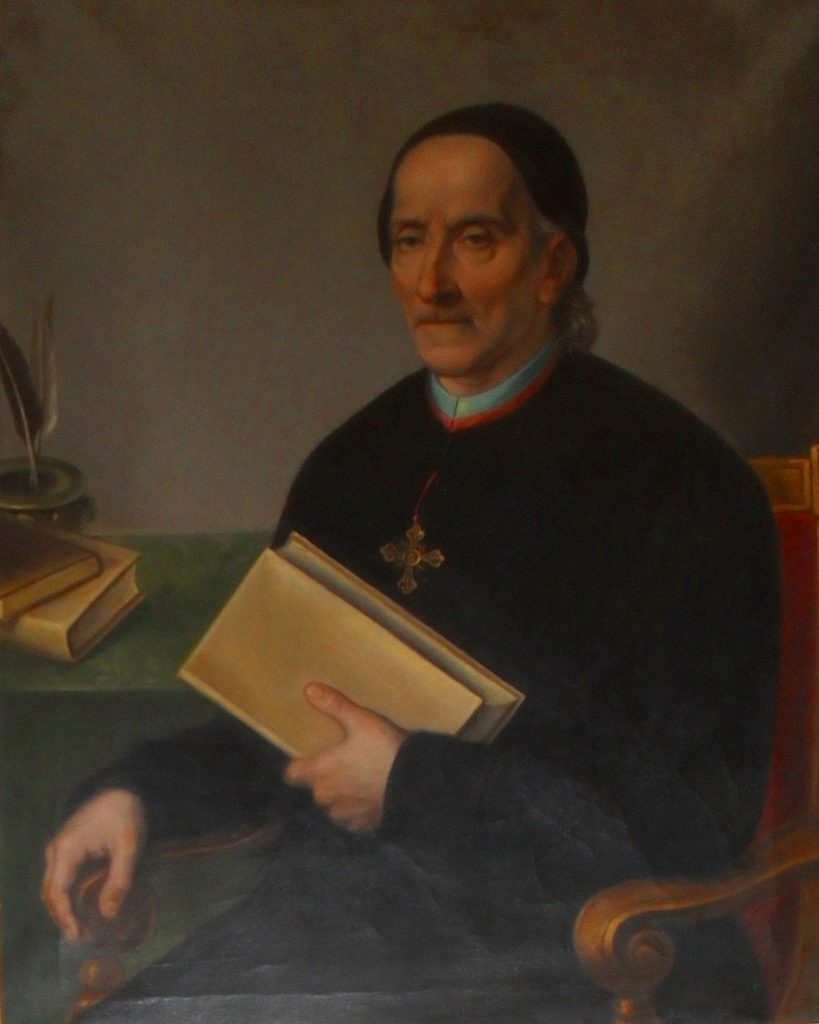 Mons. Joseph Benaglio is a historical figure of the Diocese of Bergamo and his life is significantly present with the charism and spirituality of the Congregation of the Daughters of the Sacred Heart of Jesus. He is the founder of the Congregation with St.Teresa Verzeri.

He was born in a noble family of Benaglio and Ginammi, which has a long list of famous personalities officially and of piety. He was a joyful and jolly person who liked the friendship, also strong-willed and versatile. Above all, he was a scholar of sacred theology and ecclesiastical literature in the various branches such as liturgy, patrology, history, apologetics, hermeneutics, exegesis, asceticism, mysticism, dogmatic and moral theology, as well as human sciences. However, more than studying, he devoted himself to prayer, convinced that more than those studies, weneed the men of the Church, to be effective in the ministries.

He ordained as a priest in September 1790, and at the age of twenty-two, he has appointed as Canon of the Bergamo and became friends with educated and spiritual people.  He loved to live a “very active” solitude, and in the rented room, he studied and prayed at night, reviving in his heart with the fire of charity that poured into his writings. For the sake of solitude and the need for union with God he could not finding the time to walk or to do a little vacation, but he was not melancholy, on the contrary he was affable, lively and of good company. His devotions to the Infant Jesus and to the Crucifix, to the sacred Heart and to Jesus in the Sacrament, flowed from the desire to correspond to the excess of love that our Savior and Redeemer Jesus had shown to humanity in His earthly life. Jesus Christ was the reason for his gratitude and it moved him to tears, both during the time of adoration and in the Eucharistic celebration.

A man of service who, through his priestly ministry, knew the folds of the human heart, and resolved everything in God and in the discernment enlightened by the Spirit even in the painful  or most delicate problems submitted to him by those whom he help for the spiritual direction.  In the Diocese he has entrusted with many tasks, he was highly esteemed, but also very opposed, but he was always an obedient, respectful, humble and far-sighted priest. Particularly animated in the formation of the Priests he had organized meetings for young priest in order to train them for the situations that they might have encountered, and they could be able to face even the critical circumstances without fear and with competence.

It is impossible to remember his great apostolic activities, many initiatives for the youth, for the Diocese and for the Society. Certainly, his purpose was to create the formative educational environment. In 1814, he retook in the upper part of the city of Bergamo, the school of charity for poor children, providing them the education, inserted the festive recreation and the oratory for them. The same thing he did for the girls when in 1831, with Teresa Verzeri, he started the Congregation of the Daughters of the Sacred Heart of Jesus. As he guided the spiritual journey of Teresa with wisdom, he will prophetically accompany, unfortunately for a few years, for the growth of the Institute, of that “vigorous tree that, as says John XXIII, was flourishing on the ancient hill of the city “.

To understand the fact that only a few Daughters of the Sacred Heart knew him, Teresa often talks about him.

*”The Constitutions of the Institute which he traced to prove the nobility, discretion, prudence and the just. The criteria of the Founder were the ardent zeal that burned in his soul that his Daughters were as the Lord wanted by them, and gave them to the knowledge and desire “.

* “He felt the conviction of the great advantage that for the glory of God and the good of the neighbor, of which he was most zealous. He would have provided an association of women who, inflamed with love of God, united among themselves with the bonds of religious family … they should consecrate themselves together as the special aim of their Institute to works of the charity towards their neighbor”.

* “Gifted with an elevated and insightful intellect, formed of a righteous spirit, firm, robust … he wanted to establish, in this same spirit, to his Institute, the kindness and tenderness of His heart”. “I want to see the animated Daughters … the spirit of distinguished charity, a sweet charity, patient, compassionate, industrious, hardworking, who knows how to make everything to everyone, so as to win everyone over to the Sacred Heart”.

* “No matter how hard he tried he could not conceal his sanctity or his union with God. From this man, in the likeness of the divine Master, one could not expect that great works of great blessing, since the Lord favour with his adversity to his friends, to the benefit of all, making them instruments for marvelous works of his mercy ”.

* “There are no words that say simplicity and prudence, charity and discretion, humility and concealment, in short the true and solid piety of this man, truly of God and formed according to His Heart, because the pen is lost , and because the work was all divine … “. * “The Lord who wanted his joyful Servant in heaven, so called him to Himself before the Institute was formally sanctioned and approved, in fact he died on 18 January 1836, while” the Congregation not yet established, remained an orphan of her Father”! Moreover, Teresa continues: “but if the Founder missed his dear Institute on earth, it is to be believed that he helps more effectively from Heaven”.